This is a great class. Fantastic opportunity to study a range of animals and learn some different body mechanics! I’ve learned things about birds, bats, hippos, frogs, crocodiles, turtles, frogs, snakes, lizards and frogs that are amazing. Those are stories for another day.

One interesting technical aspect to this class is animating within a live action “plate”. This is a quick post to describe what that’s like.

A nice coastline vista (I think it’s Hawaii, not sure).

The live footage is setup as an image plane in Maya and renders in the shot_cam.

How do you place a character in the scene and have them look like they belong there? That’s the matchmove magic.

Matchmove was already setup, so when I opened the maya scene this is what I saw. A set of geo matching the cliffs, and a moving camera.

The camera is timed to match the live footage camera. I think lots of points on the image plane are selected across several frames, then some fancy algorithms and maths figure out how the camera must have moved. I’m sure there’s a lot of work making that just right — “Matchmove Artist” is a job, check the credits on any film with epic special effects!

This playblast shows a better view of what’s happening with the camera and image plane. Note: the image plane flickered when I made this playblast. I’ve never had that issue from the shot_cam though.

Put a creature in the shot

Since everything is setup like this, we can put our creature (Dozer) in the set and animate like normal. Here is my initial concept, as seen in Maya with the geo and camera from the perspective camera.

And here’s what that looks like from the shot_cam.

It works. But the solid geo is nowhere near the quality of the live action footage!

Here’s what it looks like if we turn off the geo. We can see the image frame nicely, but now Dozer looks pasted on top of everything.

We want him to be in the scene, and so we want parts of the image frame to show up in the foreground. The solution is to mask out the geo. Everywhere the geo is, we want to see the background. Maya knows where Dozer is in relation to the geo, so it will handle the depth for us.

This type of masking in Maya is done with a “use background” material.

How to setup the mask 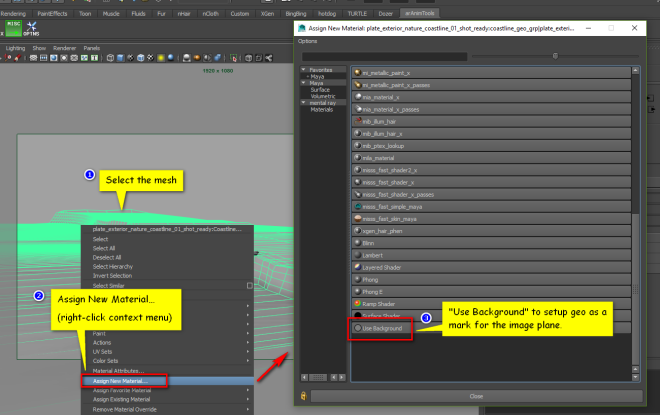